Cats in the Basement: Let’s Help them Venture Forth! 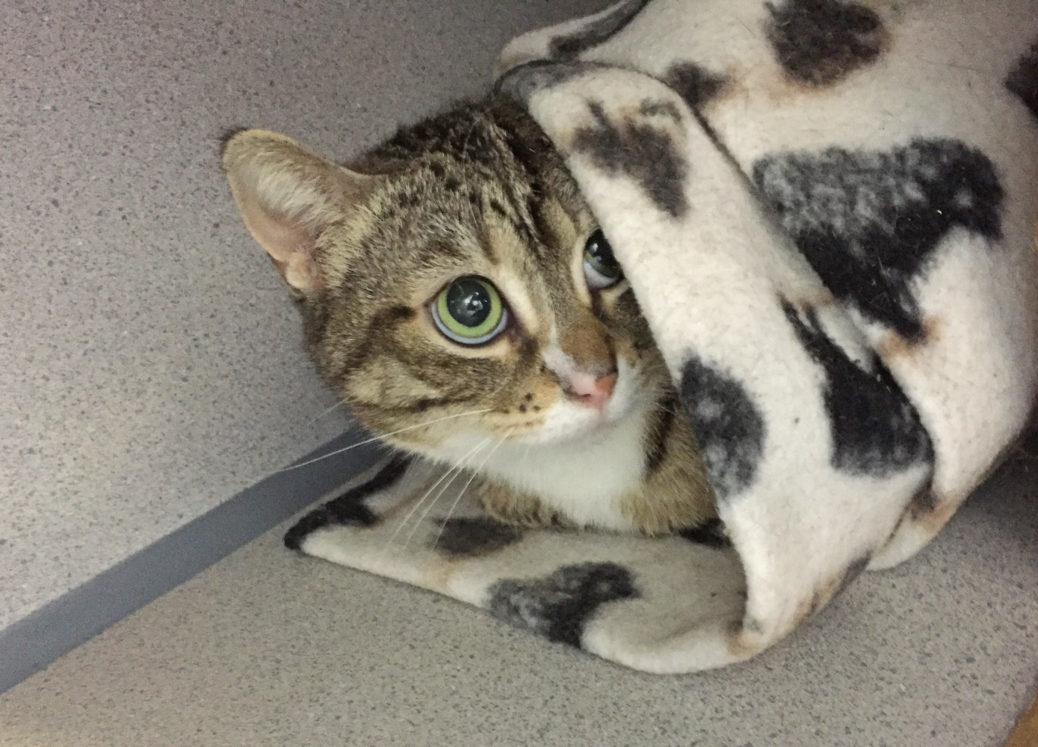 Cats in the Basement: Let’s Help Them Venture Forth!

A recent client told me that her petsitter, who stops by a couple times a day when they’re out of town to care for the couple’s two dogs and two cats, has never seen Whisper, their 8-year-old kitty. Never laid eyes on her. The petsitter wouldn’t have believed they had a second cat aside from the fact that Whisper’s food would disappear every day and her litterbox showed evidence of a cat living a shady existence in the basement (closed off from the other pets while the owners were gone).

Whisper is not the first cat I’ve met—well, heard of; I never actually saw her either during our 2-hour in-home behavior consult—that lives in the basement, or hides under the bed for most of her life. What kind of existence is that? What level of welfare is that cat experiencing? Sadly, some people think, “well, that’s a cat for you.” Others, like Whisper’s owners, are understandably concerned and want to help their cat enjoy life more.

Why are some cats so fearful?

Genetics, environment and learning all play roles in the development of a cat’s behavior and personality traits. Our domestic cats today descended from the African wildcat, which is a solitary, nocturnal and territorial species that is both predator and prey. Today’s feral cats have similar characteristics, although they may be more active during the day and more social with other cats when resources are abundant. Many are still quite wary of people, though. And if you think about it, most of our pet cats in homes are perhaps only a generation or two away from being feral; some were feral kittens themselves. Although of course there are cat breeders, how many owned cats do you know that were obtained because they were found as a stray, or somebody’s indoor/outdoor cat had kittens (oops!), or they were adopted from a shelter, history unknown? Cats are not often purposely bred for temperament traits. And if you’re lucky enough to have met the queen of a kitten you’re adopting, her personality might not be as important as the sire’s (who is likely long gone). McCune (1995) showed that the sire’s level of friendliness with people had a significant impact on the offspring’s friendliness, and the author cites two other studies that apparently concur.

Regardless, we know that environment, early socialization and learning are all important to a kitten’s development, too. Studies have shown that kittens separated from their mother before two weeks of age are likely to exhibit fear or aggression toward people and other cats; the same is true of kittens with malnourished mothers. These kittens are more likely to suffer brain deficits and are also typically more sensitive to novel stimuli.

In her 2003 book, Feline Behavior: A Guide for Veterinarians, Bonnie Beaver, DVM, DACVB, DACAW, says that the socialization period is the “single most important period during the cat’s life” (p 137). As with puppies, this is the time that social bonds form and kittens learn what’s good and bad in the world. Positive experiences now can set them up for success and confidence later in life. However, the critical window for this learning to occur is earlier and shorter in cats—roughly from age 2-7 or 9 weeks—than in dogs (about 3-12 or 16 weeks). And since in catdom many litters are unplanned, the kittens might have no, little or inappropriate socialization with people and other animals depending on their circumstances. It seems to be less known among animal lovers that young kittens—just like puppies—need positive and safe experiences with a variety of people, animals, environments, objects, textures, noises, and handling for the best chance at having an outgoing and friendly adult cat.

So if you’re living with a fearful cat, it’s almost certainly a combination of nature (genetics) and nurture (learning and environment) that contributed to his timid personality. While past trauma or abuse are possible, they are probably much less likely to be factors.

There are some great online sources (listed below) that delve into feline body language, but some generalizations warrant mention here.

When a cat is fearful, she might try to make herself look smaller (crouch down with her feet underneath the body, tail wrapped tightly close, and head lowered) or larger (legs straight, arched back and piloerection). Or she might hide under or behind an object or climb high where she can observe the threat from a safe perch. Other alternatives are to feign sleep in an attempt to block out the scary stimuli or display aggressive behaviors in an attempt to make the threat go away. Cats may have a tendency toward freezing, fighting or fleeing, but they can learn that if one set of behaviors doesn’t work in a particular situation to try another. 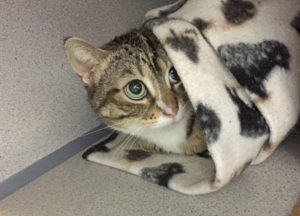 I see a continuum of fear in the shelter cats and owned cats that I work with. My own cat, for instance, is generally a happy girl who enjoys social interactions with her human family and can be found most often in the same room we’re in. She might lie in our laps or in her cat bed, and she enjoys playing, foraging for food and exploring the backyard when supervised. But if the doorbell rings, she startles and hides, and she’s not a fan of the vacuum cleaner. Often, however, her curiosity gets the best of her, and she’ll eventually greet a visitor or even watch the vacuum cleaner from above. I could work on desensitizing and counter-conditioning her to doorbells, visitors and vacuum cleaners (and I probably should!), but I believe her quality of life is quite good despite those few scary moments that only happen occasionally. I will call this Fear Level 1 (FL1). 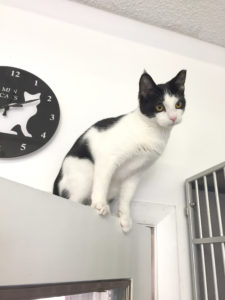 Perhaps the next (worse) level of fear in a pet cat—Fear Level 2, or FL2—would be one who has friendly interactions with at least one household member but hides or becomes aggressive when one or more particular household member or another pet is around. 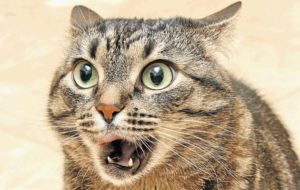 FL3 might be a cat who hides during the day or when people are around, but comes out at night when the household activity level is diminished. Perhaps while lying in bed, you hear him walking around or playing in other parts of the house.

Continuing on, a cat who hides almost 24/7 except to come out to eat, drink and use the litterbox would be FL4. The worst would be FL5, a cat who doesn’t move from his hiding spot—not even to eat, drink or eliminate. This, in particular, would be an emergency situation! But in my opinion, any of the Levels of Fear above Level 1 needs help. And of course, these are just examples and the levels of fear can encompass a wide range of behaviors and interactions (or lack of interactions).

The effects of fear

We all know that stress can affect our health, and the same is true for non-human animals. Can you imagine the stress caused by being in a constant (or almost constant) state of fear?

We often use the terms stress and distress interchangeably, but psychologists differentiate between them. In a Psychology Today blog, Nancy Darling, PhD, explains stress as something that happens that requires the use of resources, but distress occurs when “…the resources demanded of us outstrip the resources we have.” According to Merriam-Webster, stress is “a physical, chemical, or emotional factor that causes bodily or mental tension and may be a factor in disease causation.” For simplicity’s sake, I’ll just use the term stress here.

While acute stress helps protect us from harm by encouraging us to change our behavior to get back to “normal,” chronic and maladaptive stress continue to affect us negatively, sometimes even after the original stressor has been removed. For instance, a cat runs from the loud noise of a pot falling on the floor as self-protection, but recovers quickly once the noise has stopped—I would argue that is a normal stress reaction. However, if for the next few months the cat fearfully avoids the kitchen, I would call that a form of chronic (of extended duration) and maladaptive (serving no useful purpose) stress. (Of course, other learning processes are at work here, too.)

Chronic and maladaptive stress can have a variety of deleterious effects on health, including effects on the nervous system and brain; the GI, immune and endocrine systems; the skin and coat; and of course, on behavior.

And what’s easy to forget but so important to remember is that it is the cat’s perception of stress that is important here. We might know that we’re not going to hurt him, but if the cat perceives otherwise, it doesn’t matter what we know or think.

Big-picture causes of stress and fear in cats include a lack of control, novelty, unpredictable environments and social conflicts. So the key to helping fearful cats is to explore and address these factors, which is what we’ll do in Part 2 of this article. Stay tuned!