Do kittens recognize their mothers even after they’ve lived apart? 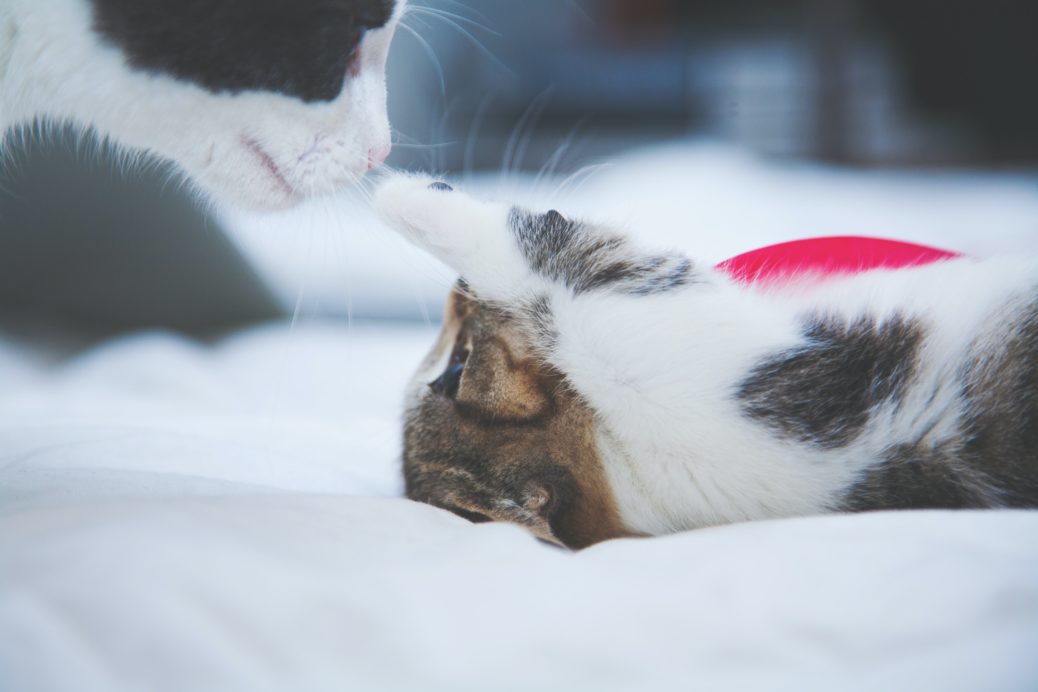 Do kittens recognize their mothers even after they’ve lived apart?

I previously reported on a study that found that mother cats can discriminate their own kittens’ smell from that of other kittens (by sniffing their butts). So mom cats recognize their kittens by scent, but what about kittens? Do they recognize the smell of their moms? And would they be able to do so a year after being separated from her? The same team of researchers in Mexico city conducted a study to find out. The manuscript, “Are you my mummy? Long-term olfactory memory of mother’s body odour by offspring in the domestic cat,” was just published in the journal Animal Cognition.

The researchers have a free-ranging colony of cats that are used for their research. In this study, they tested 58 kittens from 15 different litters of eight different mother cats. Kittens were first tested at eight weeks of age, by presenting them simultaneously with three cotton swabs. One swab had the scent of their mother (collected by rubbing the swab all over the mother’s face, chin, back, stomach and anogenital area); one swab had the odor from another female cat; and the last swab was unscented to serve as a control. When collecting the odor of the second (non-related) female cat, the researchers were sure to match the reproductive status of the mother, so if she was spayed, so was the second cat. 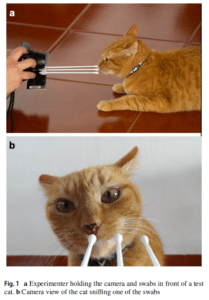 The swabs were offered to the kitten, and their response was video recorded while being gently restrained, until the kitten turned their head away from the swabs. The researchers then coded the video for the duration of time the kitten sniffed each swab. The kittens were adopted out after the first test, and were retested in their new homes when they were four months, six months and one year old. It should be noted that not all kittens were available for all four tests.

So how did the kittens respond to the swabs? At two months of age, they spend more time sniffing the swab of the unfamiliar female cat compared to their own mother’s scent and the blank swab. This may be because the kittens were used to the smell of their own om, and were paying attention to this new, strange scent. Dogs and rats also show a tendency around the time of weaning to investigate unfamiliar smells more than those that are familiar.

At four months of age, the kittens had been separated from their mother for around two months. At this point, there was not a clear difference in sniffing time for female kittens, but male kittens spent more time sniffing the swab from their own mother.

At six months and 1 year of age, both male and female kittens showed a strong preference for sniffing the swab with their mother’s scent, compared to the other two swabs. This suggests that kittens might retain a memory of the scent of their mother for up to one year. Whether they recognize the smell as their mother, or as just familiar, is unknown, but they clearly responded differently when presented with her scent compared to that of an unknown cat!!

Would it be helpful for kittens to remember their mothers? That is unclear. One hypothesis is that recognizing your relatives would help you avoid mating with them. It would be interesting to see if kittens would have similar responses to their siblings or if they could discriminate between say, their mother and an aunt! However, it does not appear that cats are that discriminating when it comes to making babies, and many will mate with close relatives.

This research also supports the hypothesis that cats have individual odor signatures that remain stable over time. These scent signatures are likely important to cat relationships of all types, whether cats who are related, or cats who live together as preferred associates, or perhaps even tracking cats who are unfriendly with one another.