Help! My Dog Eats His Own Waste! 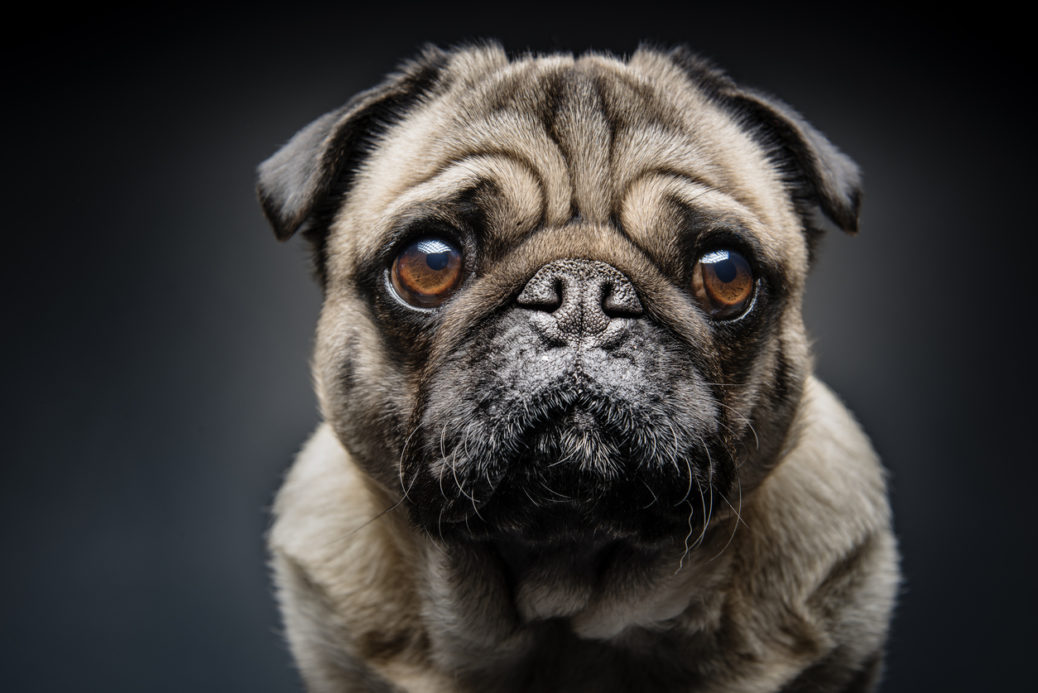 Molly and Polly were two Pugs I worked with several years ago. Among other problems, I was called in to address an issue the owners found especially distasteful – the dogs ate their own feces. When crated, the dogs would defecate and then eat whatever they had deposited. Outside, they would circle around in the middle of the act itself, eating their feces before they even hit the grass. The owners were, of course, repulsed by this behavior and worried that their dogs would get sick from their bizarre eating habits.

The ingestion of feces has a technical name – coprophagia. Coprophagia in dogs is not uncommon. When a litter of puppies is born, the mother dog must lick the pups’ anogenital region to stimulate urination and defecation and she also ingests these waste materials from her pups to keep the den clean. In some dogs, even those who aren’t mothers to pups, the behavior may pop up here and there because it’s genetically predisposed – that is, it’s a part of the normal behavior of the species as a whole, at least in the context of the mother and her pups.

Before any behavioral interventions are developed for coprophagia, the dog must be examined by his or her veterinarian with a full description of the behavior provided by owners. There are a variety of medical and nutritional conditions that can cause coprophagia, so a veterinarian is the first professional whose advice you should seek when you notice your pup eating his or her poo. If your veterinarian confirms that your dog is in good health, and that there are no medical conditions underlying this behavior, then you should develop a behavior plan to address it.

There are multiple environmental conditions that can lead to coprophagia in dogs. For some, the behavior stems from early excessive confinement (in a crate or larger enclosure, or even in an outdoor penned area) combined with lack of enrichment, where eating feces developed due to hunger, boredom, anxiety, or instincts toward maintaining a clean den. Many dogs who are purchased from puppy mills (or from disreputable breeders) can develop coprophagia early on under these conditions. I also have seen cases where dogs have become interested in their own waste as they follow their owners around the yard while owners clean it up. In these cases, the owner is “interested” in the poo, so the dog becomes interested as well and may take a sample nibble here or there. I have seen cases of dogs who live enriched lives but whose yards were often left a bit too cluttered with feces, and eventually curiosity alone led to a taste for the stuff. Owners can even unintentionally reward the behavior because they see the dog sniffing feces and rush over to interrupt the dog with play or scoop her up into their arms for a cuddle.

Our first goal is to minimize or prevent access to the dirty delicacy. Owners must be vigilant in cleaning the yard or other space where the dog is accessing feces. For those dogs who prefer feline feces (which is common), the litterboxes must be moved or positioned such that the cat can easily access them but the dog cannot. Owners may need to provide increased supervision in the yard or when the behavior is likely to occur – staying present long enough to scoop up any waste that is deposited before the dog has the chance to go for it.

Owners should also consider their dog’s enrichment and exercise levels – dogs should be provided with daily exercise (30 minutes of aerobic activity per day at a minimum) and social opportunities (play with owners, walks, or car rides to dog-friendly places.) The dog should be especially encouraged to play in the context in which the coprophagia occurs – teaching the dog that the back yard is a cue for lots of ball play with the owner, for example, so that this can compete with her other “habits.”

In some cases, a change or addition to the dog’s diet can help. Sometimes an improvement in dog food quality leads to reduced interest in feces from the outset because it provides a better alternative food source or it changes the palatability of the feces which leads to reduced interest. Although their effectiveness has not been systematically tested, soft chews are available for purchase that are designed to reduce the palatability (or change the smell) of the feces in order to reduce coprophagia. Owners also have reported that adding pineapple to the diet has reduced their dog’s interest in his or her feces, again likely by changing either its taste or smell.

When the owner is outside with his or her dog, the owner should also teach the dog to Come or to catch a ball as an immediate post-pottying activity. In this way, the dog is taught to leave his or her poop and to instead do something fun with the owner. Then the owner can remove the feces while the dog is otherwise occupied chasing a ball or eating a treat. For dogs who follow their owner around trying to beat them to the waste, a Leave It or Stay command should be taught.

Some dogs engage in coprophagia while crated, and thus owners are not present for the act and can’t clean it up but instead find only remnants when they return. In these cases, we rearrange the dog’s home-alone conditions, working through possibilities of other places of confinement or other schedules of being left alone, so as to improve the dog’s toileting habits first.