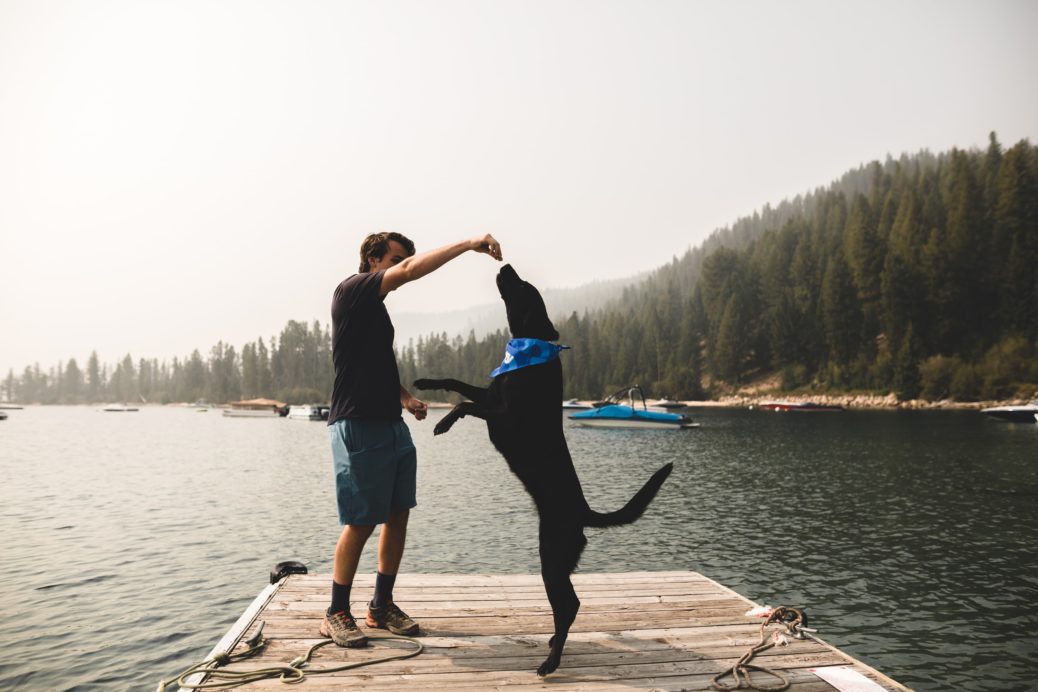 When dogs are trained with methods such as leash jerks, yelling, and shock collars, they have worse welfare than dogs trained solely with food rewards, according to new research.

Although many dog trainers and guardians have already made the switch to using reward-based methods, some still use aversive methods such as leash jerks and prong collars. While previous research has shown that there are risks to using aversive methods, new research finds they affect a dog’s emotional welfare during the training session. As well, dogs trained with a high proportion of aversive methods are less optimistic than those trained only with rewards.

Aversive methods are those based on positive punishment and negative reinforcement. Examples of positive punishment used by the schools in the study include leash jerks with a prong or choke collar, using a shock collar, and hitting or yelling at the dog. Examples of negative reinforcement included pulling up (or down) on the dog’s collar with the leash and releasing it when the dog sat (or lay down). Students of dog training will know that something is only punishment or reinforcement if there is a change in behaviour. For this study, the researchers looked at whether the training was intended as positive reinforcement, etc., as they were not assessing the effectiveness of the training. Other studies have shown that petting does not work as well as food in dog training.

A total of 92 dogs took part, all of whom had attended the school for less than 2 months and who did not have a serious behaviour issue (such as separation anxiety or aggression). In the training context, several saliva samples were taken from each dog, and video was recorded of the first 15 minutes of each of 3 training sessions.

Then, the dogs took part in a cognitive bias test. At a room at the university, the dogs were first trained that if a bowl was put in one location it would always contain food, and in another location it never did. To be sure they weren’t using their nose, when the bowl was empty it was first rubbed with the food. Once the dogs had the hang of it, the scientists began to mix in some test trials in which the dog was presented with a bowl in one of three ambiguous locations, either exactly in the middle or closer to one of the other locations.

The results showed that within the training sessions themselves, dogs in the Aversive group showed more body language signs of stress (such as a crouch, yawn, lip lick, and a body turn) than dogs in the Reward group. Dogs in the Mixed group also showed more stress-related behaviours than dogs in the Reward group. And dogs in the Aversive group showed more of these behaviours than those in the Mixed group.The idea is that if a dog is feeling optimistic that the bowl might contain food, they will run faster to get there. This is a standard test of welfare that has been used in other studies (see for example, finding hidden food in nose work increases dogs’ optimism).

In the cognitive bias test, dogs in the Aversive group took longer than those in the Reward group to reach the bowls in ambiguous locations, suggesting they are less optimistic. Dogs in the Mixed group fell somewhere in between, not significantly different from either.

Some other studies (but not all) have found that reward-based methods are more effective. In this study, there was a tendency for dogs in the Reward group to proceed through the training on the cognitive bias test faster than those in the Mixed group, but it was not a significant difference. More research is needed on this.

This is an important and thorough study, and while it is quasi-experimental, it does not prove causality. The authors point out that there would be ethical concerns in setting up a randomized-controlled trial to test training methods given the evidence on the risks of aversive methods. The paper itself is open access if you wish to read it in full.

“Critically, our study points to the fact that the welfare of companion dogs trained with aversive-based methods is at risk, especially if these are used in high proportions.”

Overall, these results show that dogs trained with aversive methods do not have such good welfare as those trained only with reward-based methods, and this effect is even stronger when aversive methods are used more often.

For more on how to train and care for your dog, check out my book Wag: The Science of Making Your Dog Happy.