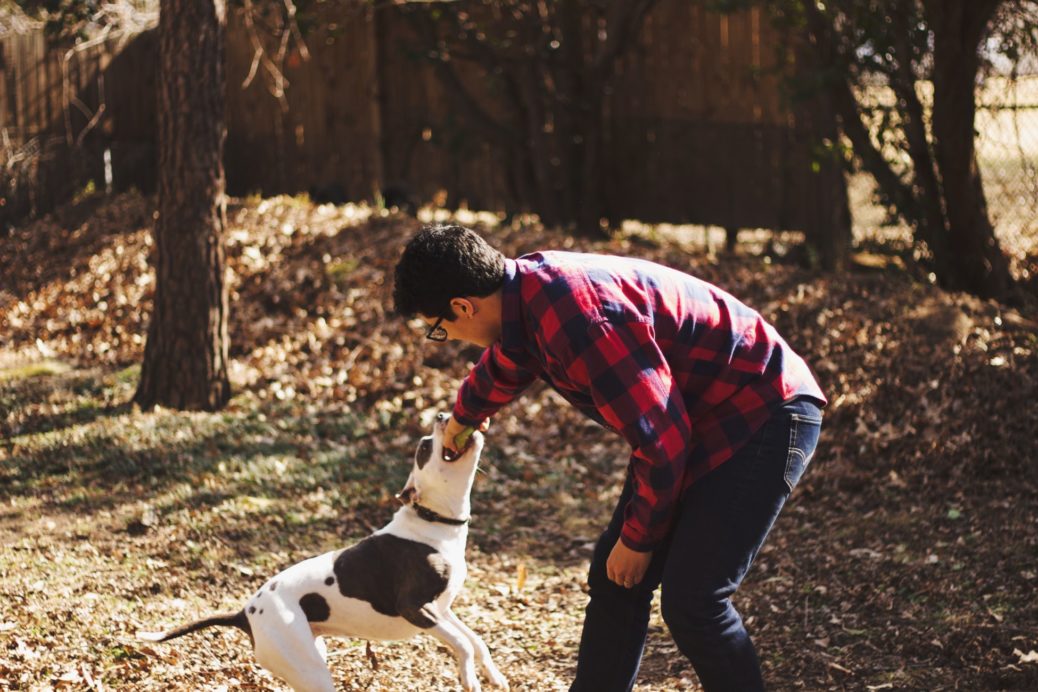 One wonderful option for owners interested in playing with their dog is tug-of-war, but tug toys (e.g., ropes or stuffed toys) have a bad reputation because some owners have heard that tugging with their dog will make their dog aggressive. This is one of many old dog training myths that still hold sway. Rest assured, however, research has since demonstrated that tugging with a dog does not create aggression – in fact, even when you let the dog win by taking the toy, all he or she tends to do is bring the toy back for more tugging!

It is true that you should not play tug-of-war with a dog if she is already aggressively possessive of her toys. However, if your dog has never shown aggression in the past, tug games can be played safely, as long as your dog reliably responds to the “Drop It” command.

Here’s how it works: Keep some treats in your pocket as you play. Tug for a few minutes and then, while tugging with one hand, remove a treat from your pocket with your other hand. Bring the goodie to your dog’s nose, and say, “Drop it” in a happy, clear voice. It is likely that your dog will release the tug toy in exchange for the treat. When she does so, praise her and deliver the treat as you remove the tug toy. Then resume toy play.

Over time, your dog will begin to release the toy as soon as she sees you moving your hand toward her with the treat (while saying “Drop it” each time). After several repetitions of this, start to say “Drop it” as soon as you reach into your pocket, then deliver the treat if she releases the toy to you. Your dog should soon release the toy at the “Drop it” command.

Soon, you can start to offer praise alone for relinquishing the toy about half of the time, with praise plus treat being delivered the other half of the time. Continue to praise each time she drops the toy, but gradually reduce the number of times you actually provide a treat, so that she ultimately will drop the toy in exchange for praise alone and more tug play.

Indoor chase games are also great fun for dog and owner alike, and they are a way to provide more aerobic exercise than tug play. The same “Drop It” training can be used to teach your dog to drop a ball she has retrieved. Yet many owners find themselves chasing after their dog as she runs with the tennis ball in her mouth, refusing to relinquish it.

Of course, this is great fun from the dog’s perspective, but often less so for owners. Begin to offer a treat in exchange for the ball as described above. Remember: if you get rid of the treats all at once, she may stop releasing the ball to you. However, if you keep her guessing as to whether she will get a treat on any particular drop of the ball, she will continue dropping in hopes of a treat each time. Of course, for some dogs, the ball is infinitely more exciting than any treat you could offer. In cases like this, you will need to get more creative in teaching the “Drop It” command. For example, you could throw her second-favorite toy and trade her when she returns for her favorite toy of all. Next month, we will work through a behavior case in which the “Drop It” command became the most important tool in one owner’s dog training toolkit!

***This article was written by Megan Maxwell, Ph.D., CAAB and originally posted September 4, 2019 on her blog Pet Behavior Change Blog.